Skip to main content
This site is best viewed using the current browser version of Chrome, Firefox, Safari, Edge. If you are using an out-of-date browser version or unsupported browser version, you may not experience the complete effect when viewing the site.

Successful farming has always been all about strategic risk management and now farmers face a more complex range of risks than ever before. With the widespread development of chemical resistance and increased environmental concerns, the whole industry has felt the need to diversify control programs and introduce softer chemistry wherever possible.

While other farm programs have moved away from over-reliance on a single solution, rodent control programs have some catching up to do. Most of them are still limited to repeated use of the same or very similar anticoagulants.

Now the introduction of different chemistry in a new formulation makes it much easier to rotate through different modes of action and formulation types.

Cholecalciferol is a natural, non-anticoagulant active ingredient which has been recognised as a very efficient rodenticide for decades. Its first big advantage is its speed of control. Rodents that consume a bait stop feeding within twenty-four hours. That allows more of them to feed on the available baits in a short time and the whole population can be controlled after as few as two bait applications. Conventional anticoagulant baits may require up to six applications to deliver similar results.

Cholecalciferol’s second big advantage is a substantially reduced risk of secondary poisoning. Anticoagulant rodenticides are only metabolised slowly and residues accumulate in the liver, kidneys and stomach, which means dogs, cats, birds or livestock such as pigs can potentially consume a lethal dose from the carcasses of affected rodents. Cholecalciferol is rapidly metabolised, so rodent carcasses pose minimal risk to other animals.

The only obstacle to cholecalciferol jumping straight to the top of the rodenticide charts way back in the 1980s was the taste and researchers couldn’t make it palatable enough to attract rodents as strongly as other baits.

The BASF scientists who developed new Selontra® Soft Bait went much further than simply overcoming that historical problem. They created a formulation that has been assessed in trial work as four times more palatable to rodents than typical rodenticides and over thirteen times more palatable than maize silage. So suddenly the chemical that had been the least attractive has become almost irresistible.

All of which means building a product rotation around Selontra has much greater advantages than simply protecting the effectiveness of anticoagulants.

The diagram shows how one possible annual rotation pattern using the BASF product range can incorporate two different modes of action and formulation types, ensuring that no single mode of action is used for more than three months at a time. The recommended seasonal matching takes into account the likely levels of pest pressure and weather conditions. 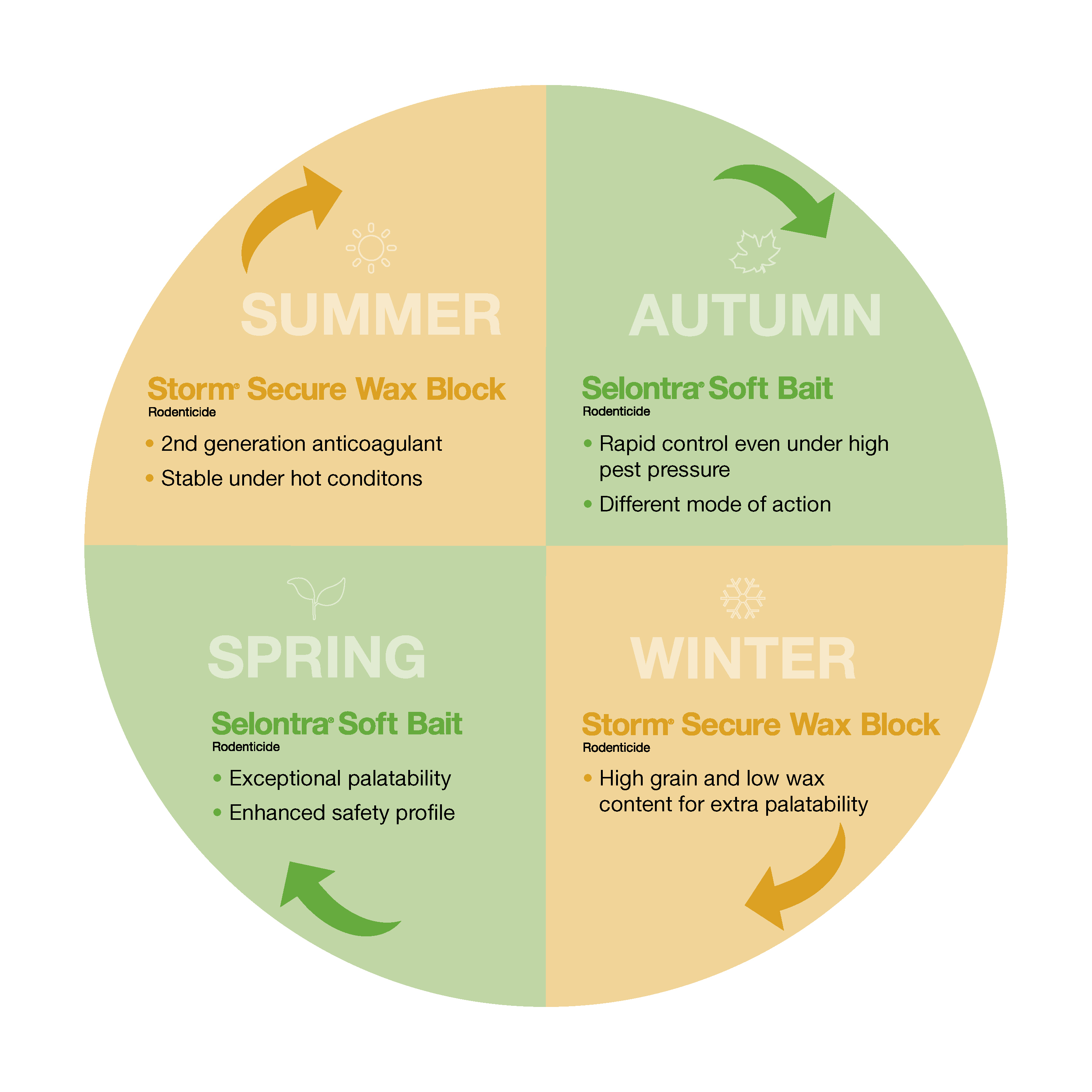 The rotation takes full advantage of Selontra’s speed of control in Spring and Autumn, when the availability of seeding grass and mild weather usually create peak rodent pressure.

For the more extreme temperatures typical of Winter and Summer, Storm® Secure Wax Block is a robust, reliably effective bait formulated to limit mould growth and bait spoilage while remaining highly palatable in both hot and cold conditions.

Adopting a rotational approach to rodent control with the introduction of Selontra’s advanced mode of action will make this important aspect of risk management as efficient and sustainable as farms’ other crop, stock and storage protection programs.

For more information on the BASF rodenticide portfolio contact your Area Sales Manager.